Back to top
IBM

Working in partnership with George P. Johnson, we were engaged to rethingk the IBM THINK experience for its relocation to INNOVENTIONS West at Epcot at Walt Disney World Resort. IBM's THINK exhibit was"

"An exploration into making the world work better. Consider the advances of the past century. The way science has improved our daily lives. The possibilities unleashed by technology. The things we can do today that earlier generations could not even imagine.
Yes, this is about better information, tools, algorithms—but that’s not all. It’s about the deeply human quest to make the world more livable, safer, more efficient, more sustainable.
Over the past century, the women and men of IBM have played a part in this unfolding story of progress. Today, we feel more confident than ever in people’s capacity to see the world with greater clarity… to map what we see… to understand its dynamics. All of which builds shared belief… in a better future, and in the way each of us can act to make it so.
On this, our 100th anniversary, we wanted to share some lessons we’ve learned. The THINK exhibit is an exploration into how the world works and how to make it work better."

The exhibition was originally installed on Jaffe Drive at the Lincoln Center in New York City and consisted of a minimalist architecture mostly of large immersive media screens. It was a beautiful and exciting exhibit, but not exactly kid-friendly and needed some adjustment to be effective in the Disney context. We developed a series of solutions, the most successful, we felt, was an interactive experience where guests became IBMers solving systems problems in a mock city using simulated IBM technology. We referred to it as the City Command THINK Challenge.

The City Command THINK Challenge is a highly versatile and interactive concept. The goal is for guests to understand how optimizing interrelated systems, tracking technology and social trends, centralizing data, and driving architectural decisions through insights into human behavior can lead to Smarter City solutions.

In this challenge guests are brought into a briefing area for the preamble of the experience where they witness a larger-than-life overview of how cities of today and tomorrow are harnessing information, coordinating resources and improving the lives of citizens around the world.

From the briefing area guests are led into the “Command Center” where all city data has been centralized and organized into five categories: Water, Waste, Energy, Transportation, and Crisis. Here guests will be separated into five respective teams and each member is given a ‘personal communication device’ related to their category responsibility. Next, a brief introductory film plays, creating excitement and setting up the challenge. The goal of the challenge is to address any problems that arise in the City and to design a ‘smarter solution’ to make that particular system work better. The twist is that for each team to address their individual challenge they must deploy a team member into the ‘field’. This means designated team members will leave the “Command Center” and move into the ‘model city’ in the next zone. There they will need to determine where their issue is located and interface with their “Command Center” teammates to arrive at a solution. And, at some point each challenge will require interacting with another team for an express purpose. Only then, after collaboration and information exchange, do all teams collectively build a Smarter City.

It is an intense, highly kinetic and collaborative exercise in making a city work better. As teams fix problems and install intelligent solutions through multiple exchanges between the “Command Center” and the “field” they can watch a simulation of the city category they were responsible for – and better understand the smart solutions and real world stories of progress that have led to these intelligent solutions.

After the challenges are completed, teams rejoin each other as a large group and are invited to watch the THINK Film and explore more information in the interactive SMUBA modules. It’s a calming and educational way of bringing together their excitement and learnings into a broader context – helping them understand the value of a World Changing Progress. 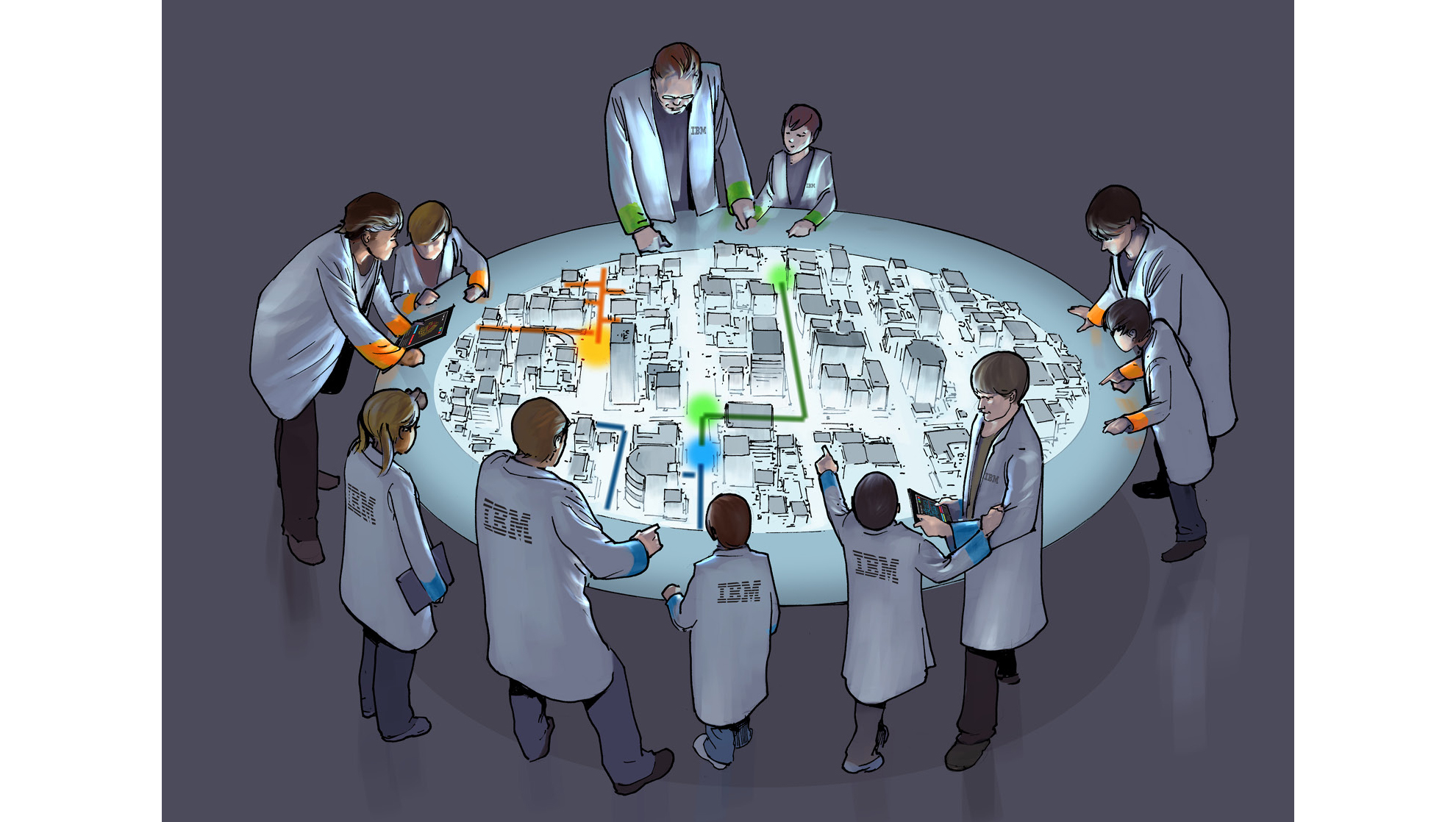 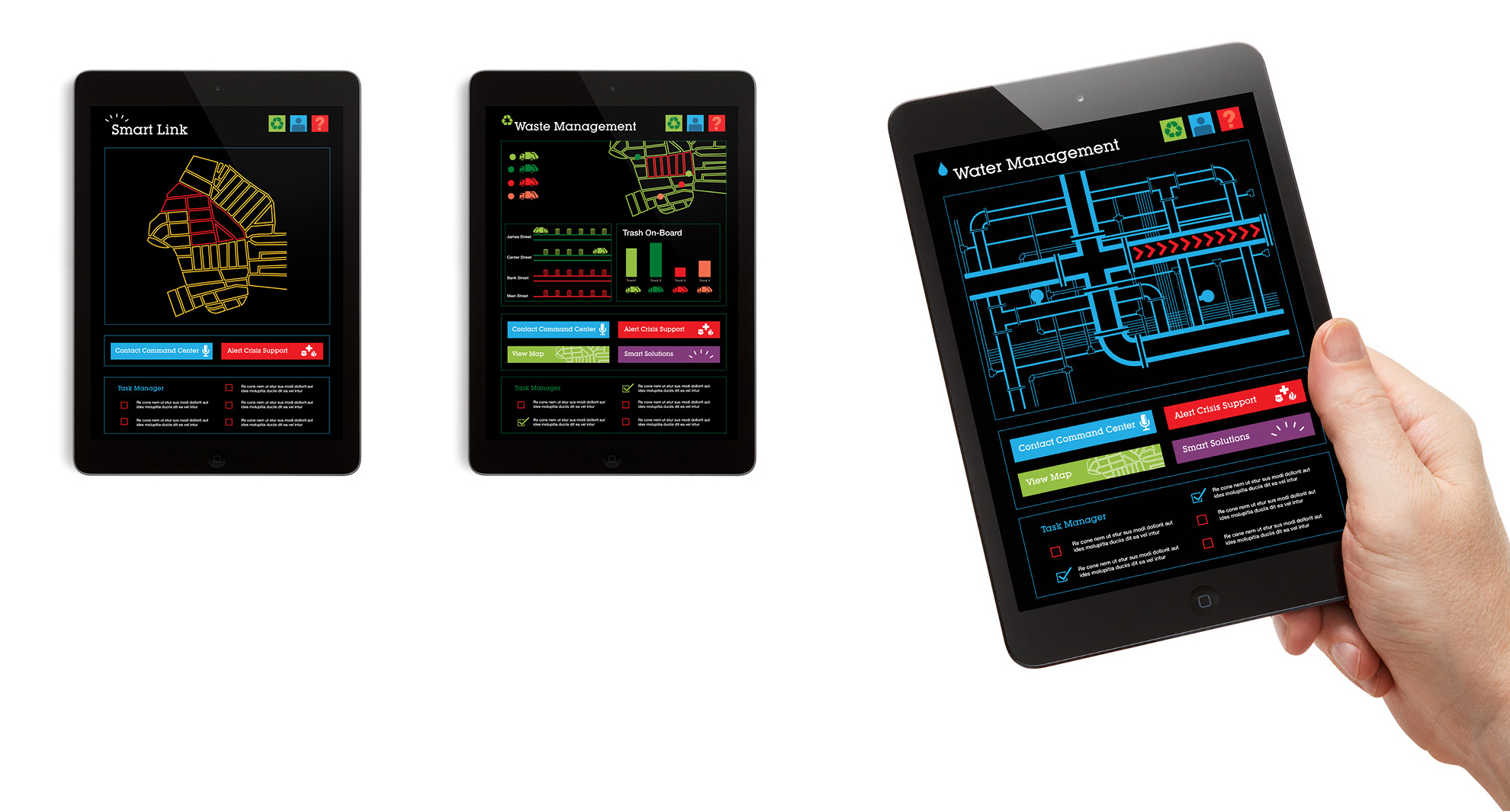